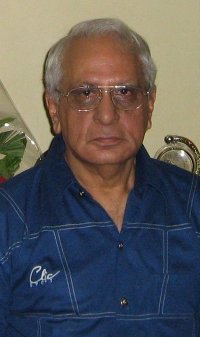 Good students are hard to find. Good teachers are harder to find. But God has been kind to me. One of the amazing teachers whom God bestowed on me was my yoga guru, Mr G S Panjwani. My husband was posted to Pune at that time and along with my son, we were staying very close to the locality where Mr Panjwani used to take classes.

I chanced upon his group class on somebody’s recommendation. After attending two classes I made up my mind to learn one on one from him. He refused initially but my persistence and dedication made him relent. I went on to learn yoga from him for eight months. My husband’s posting to Delhi caused a break in my yogic pursuit under my guru. But I will always cherish that training period when Mr Panjwani taught me wholeheartedly the nuances of breathing, meditation and the subtle divinity behind the yogic postures.

He followed Bihar School of Yoga and was seeped in the essence of this precious learning. He taught me strengthening exercises and targeted to solve my little health problems through yoga. His method was slow, steady and brilliant. Slowly I fell in love with his simplistic family comprising of his mother and wife. His three offsprings were settled abroad.

I was hugely lucky to get utmost affection and pampering from my guru’s family. They gave me the status of a daughter. So much pleased he was with my learning under him that he conferred a Teacher’s Training Certificate on me. Even after leaving Pune we were constantly in touch. He was my philosopher and guide who introduced me to spirituality in the most beautiful way. Before destiny snatched him from us, he made sure that I imbibe maximum knowledge from him.

He was like a yogic father who taught me the meaning of universal energy and how to use it through yogic practices. He was the one who put me on the path of workable spirituality. He gave me unrestricted knowledge and nurtured me with his love and compassion. Mrs Geeta Panjwani, his wife, continues to treat me like her daughter. I humbly bow my head for this continued blessing.

THE SECOND YEAR OF COVID